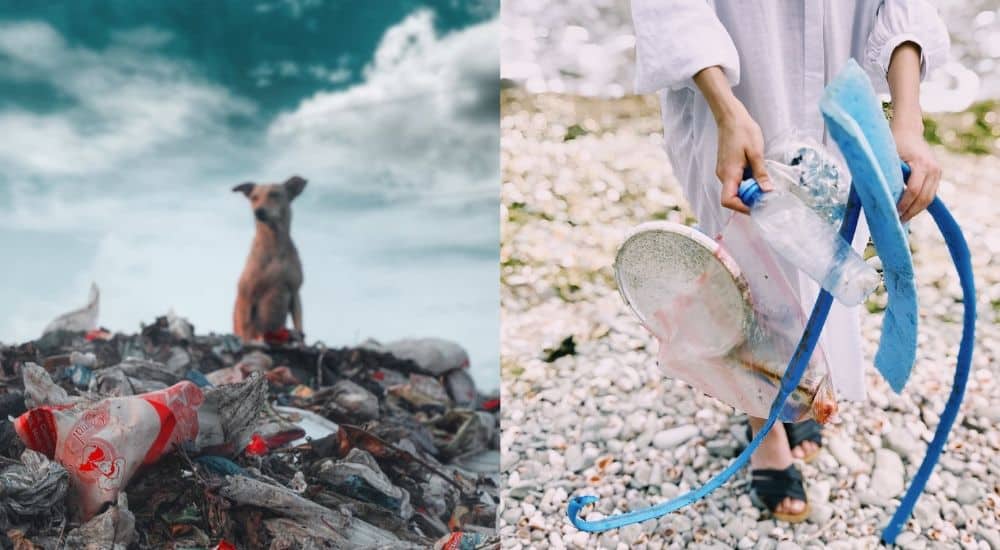 This plastic dilemma exposition isn’t made to put us to disgrace, as most of us were brought up long after the dawn of mass-produced plastics. From pacifiers that were stuck to our mouths when we were infants to the bottles that we now carry, plastic has been an indispensable part of our lives. Our sustained use of plastics has cost the world a lot, and for the past 70 years, convenience has outweighed the interest of conserving the environment and the different bio-diversities around the globe. Fortunately, this dilemma will soon come to a halt, where sustainable and eco-friendly solutions have sprung up to save the day, replacing plastics once and for all.

At the current rate of consumption, it is predicted that the oceans will house 250 million metric tons of plastic by 2050. Putting this number into perspective, that is more plastic than the number of fishes in the seas!

To make matters worse, it is found that plastics do not only look like food to animals but smells and sounds like it too. Disguised as food, aquatic animals like the sea turtles could be deceived into thinking they are jellyfishes while seagulls would plunge in for a tasty meal.

While some have stamped plastic poisoning as the start of the sixth mass extinction of life on Earth, these alarming insights and statistics may seem irrelevant or worse, foreign to others since the contamination effects plastics have caused seem to be out of sight. So why worry? Well, hear this – What goes around, comes around. Since marine life cannot stop eating plastic as food, the plastic that is disposed of in the ocean will ultimately be ingested by humans.

What about the other pollution effects that plastic has caused? By-products of plastic manufacturing contaminate our air and soil, plastic dumped in landfills could mix with water to form hazardous chemicals and degrade the overall water quality while incinerating plastics could release harmful chemicals such as dioxins. Even smelling that “new” plastic smell is the smell of phthalates off-gassing where all these toxic chemicals are known to cause cancer and congenital hormonal disabilities, affect fertility, disrupt our endocrine glands and other related health problems.

The immortalism of plastics is truly a curse to the environment and its creators – humans.

That being said, plastic is incredible. Plastic is sterile, durable, yet flexible and lightweight, functional, easily shaped, economical; it is unmatched by any of its alternatives.

Besides being an adequate substitute for ceramic kitchenware or to hold hazardous household items such as bleach, the sterile properties of plastic also proved useful in medical equipment utilised in hospitals and clinics.

If it were not for plastics, packaging weight could have been up to 400% heavier, multiplying energy costs and increasing material wastage by 1.5 times. Being lightweight and durable also serves a more pragmatic function than the mere convenience of plastic bags. For example, with the incorporation and replacement of traditional materials with plastic in vehicles, plastics have enabled commercial aircraft like the Airbus A380 double-decker aircraft to save up on operating and fuel costs by 15%. This savings on fuel would indirectly reduce oil consumption and carbon dioxide emissions as well.

There is no denying that the use of plastic is critical to many industries, and some could claim that it is a lesser evil when it comes to harmful emissions and other pollution effects. So how can the problems of plastic be tackled? Will plastic alternatives help?

Think outside of the bottle

Thankfully, with the power of innovation and technology, start-ups like Bakey’s Foods and Skipping Rock Labs have begun to produce the first edible line of flour-made cutlery and seaweed water bottles, Ooho. Both products are entirely biodegradable, while Ooho bottles cost less than plastic and release far less harmful emissions to our environment, i.e. five times less CO2 and nine times less energy as compared to PET plastic.

Watch: A Spoon You Can Eat Is A Tasty Alternative to Plastic Waste | Short Film Showcase

In the case of edible utensils, they are capable of degrading entirely in a standard environment within ten days or ingested by other animals like a regular biscuit, if they were not consumed previously. Similarly, seaweed water bottles can biodegrade in a few weeks.

Of course, there is more than meets the eye. These edible inventions have raised several concerns from critics such as contamination and choking hazards. The viability of such creative solutions is still unproven until further pilot tests are conducted.

When Japanese scientists discovered a natural PET plastic-eating bacterium in a recycling plant, scientists from the University of Portsmouth unwittingly evolved it into a super-powered version of the plant-eating enzyme. This was accomplished by making a slight tweak to the enzyme’s structure that was thought to be involved with plastic degradation.

PET takes one-sixth of the plastics produced yearly around the world, where slightly over half is recycled and even less is reused. Although the discovery of degrading plastic itself is not useful, especially in marine environments, it can still promote the recycling process, potentially replacing mechanical recycling methods, i.e. melting of plastics.

With hashtag campaigns like #StopSuckingIt being a huge success, celebrities, politicians and large food chains in countries like Singapore are beginning to join the anti-straw movement as well. Be it alleging to save the environment, cutting manufacturing costs or banning plastic to “feel good”, this movement was started based on an unverified claim made by a nine-year-old boy: that 500 million straws may end up in the oceans every day.

In actual fact, plastic garbage may be a genuine problem with marine life, but plastic straws constitute only a small fraction of it. The banning of plastics has also led to genuine issues such as depriving disabled people who need straws to eat and drink. Some may even question whether “living backwards” is worth it at all.

This is not a positive video.It's about a trait that all humans have, including me. I'm sure many won't agree with me, and that's fine. But I hope we keep the conversation civil. These are just my honest thoughts. INSTAGRAM: @NasDailyGROUP: Nas Daily Global

On the flip side, there is a much profound purpose behind this anti-straw movement. Even if phasing out plastic straws were not purely driven out of concern for the environment, but commercially motivated instead, making a little change such as this allows us to accustom everyone into making societal changes for the sake of the situation. Sacrificing convenience for a healthier world would be seen as the socially right thing to do, and in the future, people will be unhesitant for a more massive switch from plastics.

Rethinking our war with plastics

It is without a doubt that everyone can play their part in preserving the world from the clutches of plastic, but the ultimate burden lies on scientific communities which created these “miracle-materials”; employing any available technology and developing refined solutions in countering existing and future plastic waste patches should be made their highest priority.

We should be more conscious of what we are buying and using. it’s always better to minimize plastic items in our daily life. Try to consume reusable and sustainable products like LastSwab which is a clever alternative to cotton swabs. It is produced to decrease plastic pollution and harmful waste impacting our environment.

With both technology advancements and societal changes in place, the predicament we have descended the world into could potentially be resolved, and who knows? Maybe the oceans can finally look like a kid’s drawing of marine life again.

Watch: Plastic Pollution: How Humans are Turning the World into Plastic

Home » The Plastic Dilemma (Rethinking Our War With Plastics)