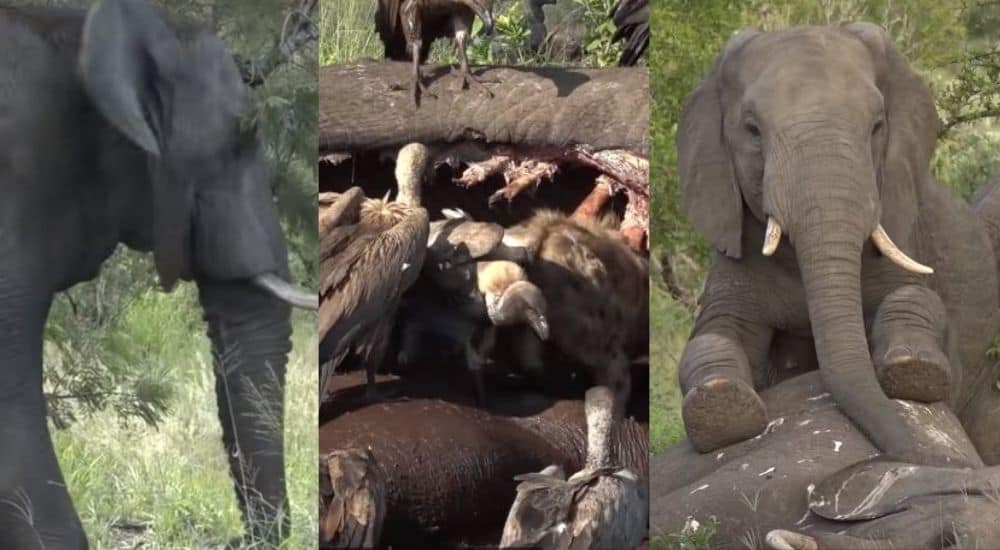 Nature wastes nothing. Not even the carcass of an African elephant. Don’t get us wrong. In this video shot by National Geographic, the death of this elephant shows how important every creature is important in the vibrant ecosystem of the wild. In an oddly satisfying way, this natural process is beautiful to witness.

Do not watch if you have a weak stomach!

From this scene, we can actually tell that the insides of the elephant have been turned inside out by something. The elephant has most likely been attacked by another male elephant during a fight. It is on the verge of death, where it is seen trying to rest his head on the tree.

According to the narrator, this African elephant is probably around 25-30 years old while its attacker is probably a larger and older 40-year-old elephant. He also speculated that the reason behind the attack was due to mating season, where male African Bull Elephants are in a heightened hormonal stage. This makes them more aggressive and unpredictable.

Mourning A Loss Of A Beautiful Creature

The loved ones of the African elephant come to visit its carcass to mourn the loss of their fellow member. The process of mourning includes “body-mounting” as well as walking back towards the carcass, often touching it with their hind foot.

It is unknown whether this process is a cultural activity that is learnt by the elephants through generations of time. In fact, this is part of an ongoing study by researchers to explain this unique behaviour displayed by the elephants.

As the carcass has been filling up with gas for a long time now, the narrator described that the smell was truly out as the Hyena popped the stomach. Once the hyenas had their fill, the vultures take the golden opportunity to feed on the elephant carcass. This is only a short gap of time and the hyenas will be back to chase them away from their food source.

The Feeding of The African Elephant Carcass Continues

Even for a brief moment, the African elephant carcass becomes busy and vibrant ecosystems of their own, where the vulture “army”, hyenas and even the decomposers such as maggots chew down anything that the larger scavengers cannot get to fast enough. The blood and fluids that get released from the carcass during decomposition have not gone to waste as well. With the help of microbes, this creates a fertile patch of ground and nutrients get reabsorbed back into the soil – the nutrient cycle.

Ecosystems Are Important Even To You

Even if ecosystems may seem distant and you may not observe its benefits directly, every single person’s reliance on ecosystems is the same. For example, healthy ecosystems help us purify the air that we constantly pollute, pollinate flowers and the crops we produce and essentially keeping Mother Earth sustainable for the living.

Unfortunately, we humans continue to take things for granted and have caused observable damage to the environment. We may try to make up for our irresponsible actions but the only widespread movement that we have started so far is the no straw initiative, where many have argued that it is inconsequential and at best, only to feel good about ourselves.

Global warming is emerging as a universal menace to ecological integrity and function, highlighting that it is imperative for us to have a better understanding of the impact of heat exposure on the resilience of ecosystems and the people who depend on them.

The ecosystems that we have has already began to suffer and is struggling to keep our Earth in balance. One notable event is the Great Barrier Reef Coral Bleaching, where 30-50% of corals died in 2016 due to climate change. Marine biologists and climate scientists claimed that this phenomenon is possibly driven by the excessive emissions of greenhouse gases.

Think about it. As the world’s population continues to grow at rapid speeds, so does our reliance on ecosystems to ensure the survival of our species.