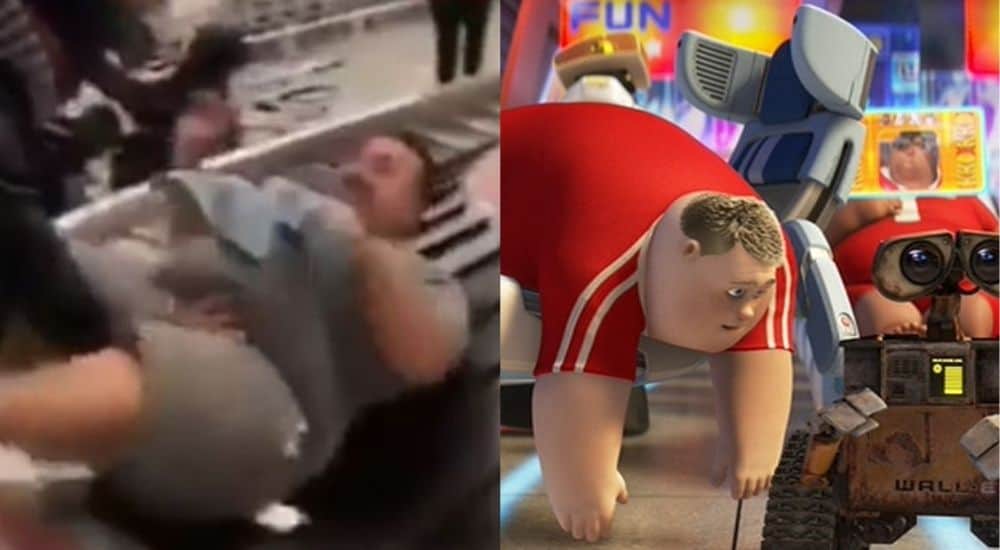 You know they always say the ones who are closest to you are the one that will hurt you the most. In today’s episode of betrayal, we have a fellow chubby Snorlax experiencing a classic case of Humpty Dumpty. A friend of his had the most brilliant idea in his entire life and decided to give his friend a push onto the luggage carousel/conveyor belt at a random airport. And the rest of the story just played out by itself:

Watch: Big Man Gets Pushed Onto Luggage Carousel By His Friends & Has Trouble Getting Off

This is a hate crime on the Unit community #UnitsRespectUnits pic.twitter.com/BpReM4om6Y

Here’s a YouTube version of it if you can’t see it:

Everyone At The Airport Was Laughing, Including the Big Man Being Pushed Onto Luggage Carousel

Everyone at the scene can be laughing hysterically at the big Montana bear trying to get himself out of the situation but to no avail.

For those of you who want to take the moral high ground and call it as a bogus case of fat shaming, forget it. The big man himself found it amusing and was laughing by himself as well. Heck, he was already grinning when pushed by his friend. To add on, the guy nearest to the luggage carousel was also seen offering a helping hand to him but was refused. He probably wanted to show everyone that he can get up by himself despite being a ball of butter.

People saying how sad this is and that they feel bad for the guy. I don’t claim to know what’s going on here, but it seems to me you all are taking this too seriously and that this was more a friendly prank than anything. This isn’t a self conscious child getting bullied on a playground

To those that experienced a deja vu moment when watching this video, you were probably thinking of this scene from Pixar’s WALL-E:

Or the falling scene when the space cruiser facing tremendous turbulence:

Now, back to the critical analysis of the video.

Why Didn’t The Two At The Back Help?

If you watch it closely, there were 2 other individuals who were very near the fat man but did not even try to lend him a helping hand. Instead, the duo just stood there like statues. They continue to witness him fail miserably at trying to get back up. Naturally, this act has been called out by Redditors on r/WatchPeopleDieInside. And their witty answers to this will be unveiled below:

It’s way funnier to not

It might result in another person being on the carousel.

Escaping in the Nick Of Time

Just like a turtle that fell over on its shell, the fat dude used momentum by rocking back and forth and finally, he was out of the conveyor belt/luggage carousel with a strategic placed right hand. Hopefully, this is the end of his embarrassment and who knows? Maybe we will see a progress video of the same guy cartwheeling alongside the conveyor belts.