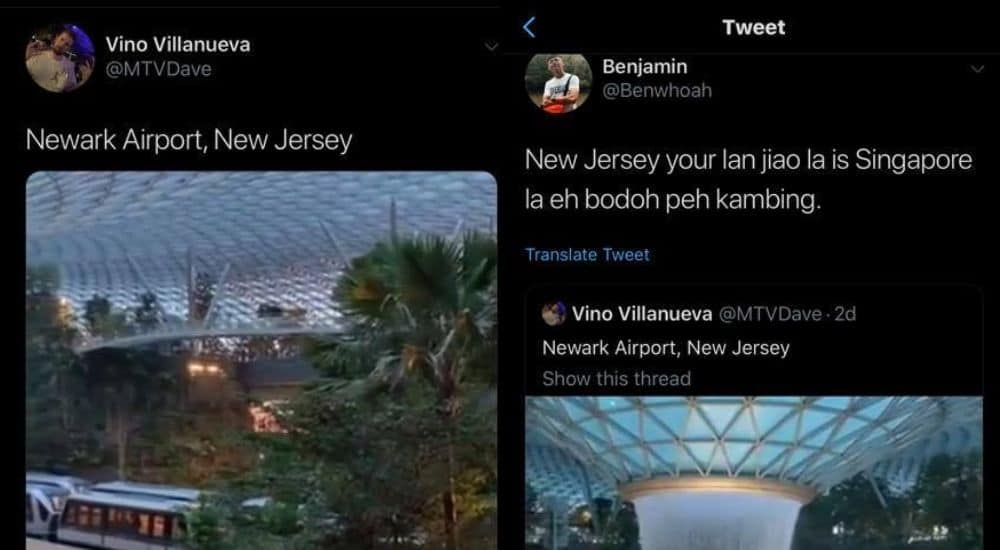 Just like any other day on the Internet, trolls will be trolls. They will never fail to trigger their target audience, no matter how cliche it seems these days. This troll, in particular, has made many enemies out of Singapore. His Twitter handle, MTVDave (Vino Villanueva), has tweeted a breathtaking video of Changi Jewel (it’s in Singapore) and claimed that this footage was taken in Newark Airport, New Jersey instead. Just to be clear, Newark Airport fountain or waterfall DOES NOT exist.

Here is his tweet, that has also garnered over 1.28 million views till this day:

Newark Liberty International Airport, formerly Newark Metropolitan Airport and later Newark International Airport, is one of the major airports of the United States. This airport that has an overall rating of 3.1 on Google Reviews has never been very outstanding, let alone accomplish the feat of having a 40 metres human-made indoor waterfall built in its airport aka the Rain Vortex.

Enraged and Perfect Comeback from Benwhoah

Of course, Singaporeans would be triggered. Many lashed out the troll and tried to put him back in his place, but this reply from Benwhoah is by far the best comeback:

Although the troll will probably not be able to understand a single word of that tweet since even Google Translate cannot decipher the intricacies of Singlish, Benwhoah has definitely made Singapore proud.

You may think that foreigners might get tricked by this troll thinking that this is indeed in New Jersey since some still believe that Singapore is in China, but not this time. Many have come out to call MTVDave’s bullshit and has even made some witty comebacks themselves:

Lol what part is that I’m used to this

Lol what part is that I’m used to this pic.twitter.com/ZFr5puc1qg

Last time I was here, they called it Changi Airport, Singapore. Am shook they’ve changed its name to Newark. In NJ 👻

Last time I was here, they called it Changi Airport, Singapore. Am shook they’ve changed its name to Newark. In NJ 👻 pic.twitter.com/xqYulQgI9O

This IS Changi Jewel.

Singaporeans can now rest in peace knowing that justice is served and on this day, this troll sure as hell did not get the last laugh.

Knowing that this is the formula to success and fame, the troll continues to post another “New Jersey” photo, i.e., a beautiful view of the Merlion with Marina Bay Sands in the background.

This attempt, however, was not as beautifully executed and the Internet has grown weary of his trickery.

Yup been there at the statue of liberty

Yup been there at the statue of liberty pic.twitter.com/JAyNndgL1T