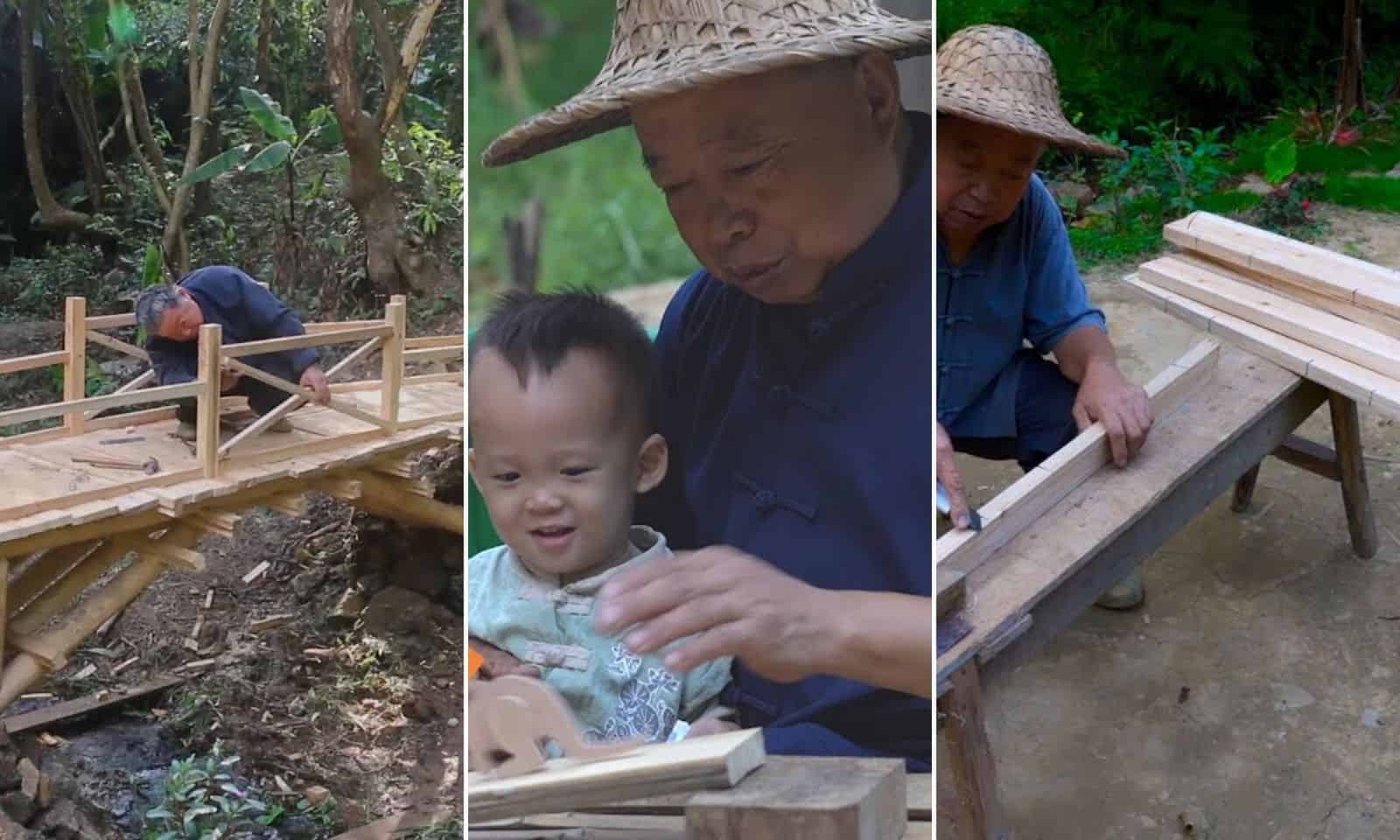 The YouTube algorithm continues to dictate what its users watch. Over the past year, we have seen hundreds of primal craft videos on the platform, many of whom we have covered in our earlier articles. But what about ancient Chinese craft? There’s one channel by the name of 阿木爷爷 Grandpa Amu.

The Carpentry Life of an Old Man – Grandpa Amu

Grandpa Amu showcases bits and pieces of his vast carpentry knowledge, with his most popular video raking up over 20 million views, showing a wooden arch bridge with no nails being built by him from scratch.

According to him, he utilises an ancient Chinese mortise and tenon technique.

This means no nails or glue is involved in the entire process of building the bridge.

What was he building it for, some may ask?

To earn YouTube ad revenue used to take care of his grandson of course! And maybe a little of beautifying his garden.

Who is Grandpa Amu?

Little is known about him, but thanks to South China Morning Post’s very detailed interview, it is stated that his real name is Wang Dewen.

This 62-year-old man has been dubbed a 21st century Lu Ban – a legendary woodworker back in ancient China with the invention of the saw and other tools, who is today regarded among the Chinese as the god of builders.

Other than being an old carpenter who works mainly by hand on different crafts, Grandpa Amu also seems to have extensive knowledge of gardening and cooking as well.

If this video isn’t enough proof as to why he is a YouTube sensation, we can say for sure that Grandpa Amu has definitely led an extremely fulfiling life and will die with no regrets.

Well, isn’t the meaning of life to be happy anyways?

Is Grandpa Amu Real or Fake?

Before we get smart about it and categorise Grandpa Amu as ‘fake news’, do note that Grandpa Amu has his whole family in his videos!

What a family business to have.

YouTube isn’t the first platform where Grandpa Amu gained his fans either. His fame was slowly grown from Chinese content platforms Toutiao and Xigua Video

Although some of the video thumbnails are grossly exaggerated and photos photoshopped, most of Grandpa Amu’s videos do appear authentic at surface level.

There are times where he will not be able to complete construction in time for a new video at the scheduled time. When this happens, Grandpa Amu will usually update via the community tab the brief technical complications and causes for the delays.

Some videos also showcase his family members, namely his grandson and son, who is the cameraman and video producer himself.

Of course, the possibility of his videos being not 100% true cannot be completely ruled out as just like most other craftsman videos, there are always parts that were edited out or fast-forwarded to accommodate to the ever-shrinking attention span of people.

Interacting with Fans All Over the World

Ever since YouTube has a community tab for YouTubers to know more and connect with their fans/subscribers, Grandpa Amu has been doing the same too.

In most of his community updates, he writes in both Chinese and English (Google-translated) languages to connect with both target audiences.

As his ancient technology does not involve machinery, nails and glue using his mortise and tenon technique, many of his fans have commended his craftsmanship work for leaving almost zero carbon footprint.

To think about it, it is a form of green technology that comes from the depth of history.