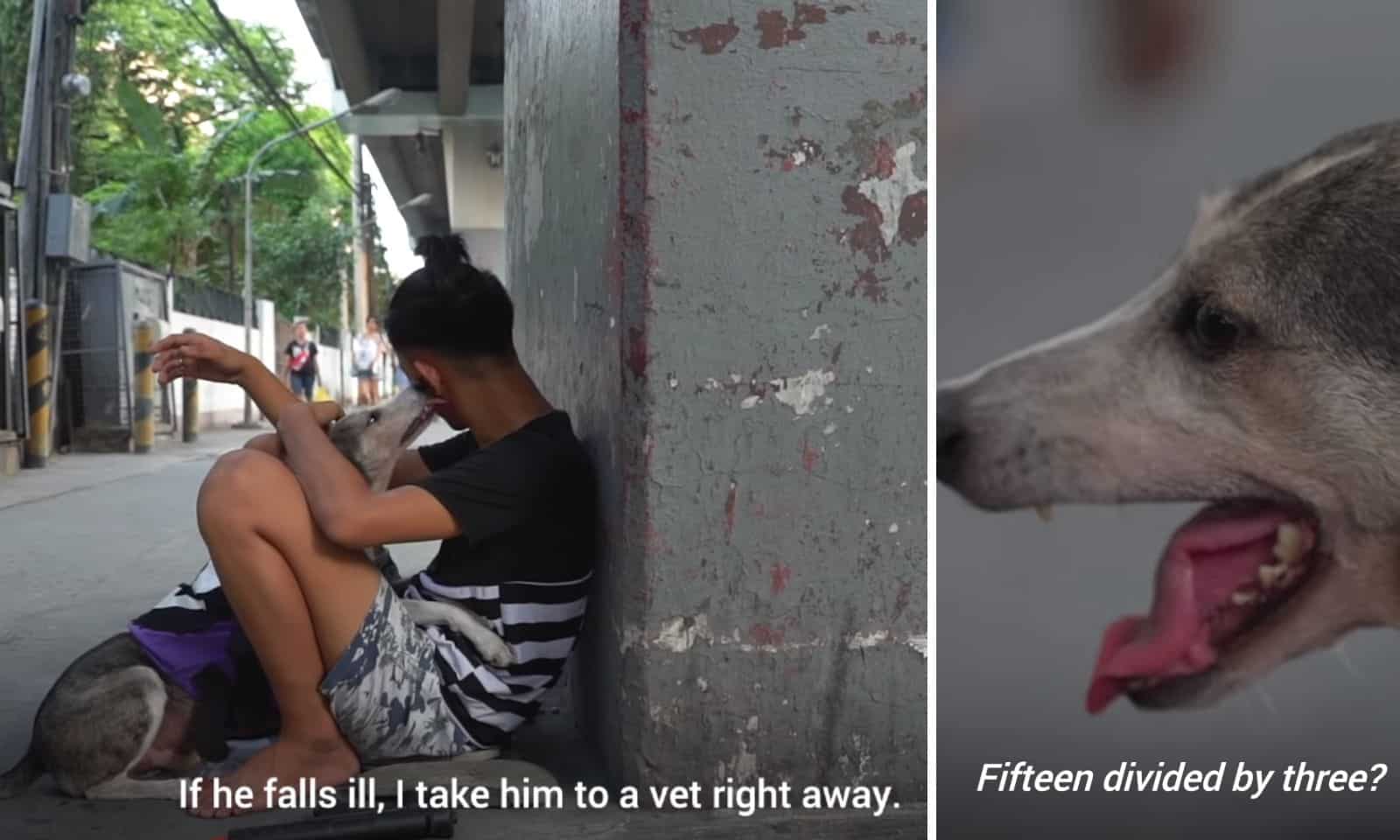 It goes without saying that dogs are 100% without a doubt man’s best friend. They watch the doors, they become service dogs for people with physical or mental disabilities and some even proudly defend our homes by sniffing out threats and criminal activity. But how about a dog that becomes the sole breadwinner of the family? That wonder dog exists in Manila, Philippines.

His name is Blackjack.

Talk about taking up a notch.

Blackjack the Wonder Dog Can Do Math!

Blackjack has been trained by busker Aquino Redoloza to bark the exact number of times in response to simple math calculations, which includes simple multiplication and division as well.

He can also “read” the number on poker cards!

Whether the wonder dog really knows what math is a whole other topic altogether.

On top of that, Blackjack can dance, jump through hoops and everything else that constitutes a full-on dog performance.

This gives the busker time to do work and revision for school, and of course, food on the table for the entire family.

While some are amazed by the bond that Blackjack and Aquino have formed and the feats they have achieved together, others are concerned for the well being of Blackjack and bashed Aquino for making his pet dog “work” for his family.

Some of these people also labelled this daily act of trying to survive and make ends meet as abuse.

Not sure how this constitutes as animal abuse though.

Currently only making 300 to 600 Pesos (8-16 SGD) a day, Aquino wants to become a veterinary surgeon when he grows up.

His goal is to heal as many dogs as he can in the future and make sure they can stay healthy throughout their lives.

Pretty sure these are not the words that would come out from a person who commits animal abuse.

Why a veterinary surgeon? Redoloza has a simple but heartwarming answer to this.

Aquino has always treated Blackjack as his best friend, maybe even as a brother. Whenever he’s sick, the Filipino busker would instantly bring him to the vet to nurse him back to health.

However, bringing him to a vet isn’t always possible due to financial reasons. This leaves Aquino with no choice but to treat Blackjack himself.

Boy With His Wonder Dog Blackjack Was Featured Before!

This isn’t the first time the Filipino busker had caught some media attention.

His father, Sergio Redoloza, was the star of the show instead. He is also a dog lover.

And another clip by GMA Network featuring Aquino and Blackjack for the first time.

With Extensive Media Coverage, Are They Receiving Help?

Aquino Redoloza and his dog may have received over 10 million views on Facebook since December 2019, but it appears that their living situation remains status quo.

Although the video by South China Morning Post is only posted not long ago, it was in fact done a long time ago and Aquino is now 20 years old. Not to mention, he also received some local coverage prior to SCMP’s feature.

He continues to live in the rough side of town, taking care of his siblings and now a bedridden father.

While many comments hint at the possibility of creating a GoFundMe, it is currently not available in the Philippines.

That means the only way a campaign can still be created to support Aquino and Blackjack is through a middleman – someone who is in one of the supported countries to raise money instead.

And we heard the story enough times now. Scammers who claim to be helping these people are crawling all over the internet.

For now, watch this space as the story may continue to unfold. Or if you are in Manila, take matters into your own hands and help them through whatever means possible.

Related to Boy with Wonder Dog: